The exhibition “Small-Scale Architecture” (croatian: Arhitektura malog mjerila) presented a small but important part of Croatian design history, product design history and architecture to a general public. It showcased the work of Vlado Petričević – Croatian architect and designer whose active work period lasts more than fifty years – from the 20th century’s early seventies to the present day. His award-winning projects bear special value as they were important contribution to the Croatia’s product design at that time. His architectural work comprises mostly of designing small family houses and renovation of historic buildings. 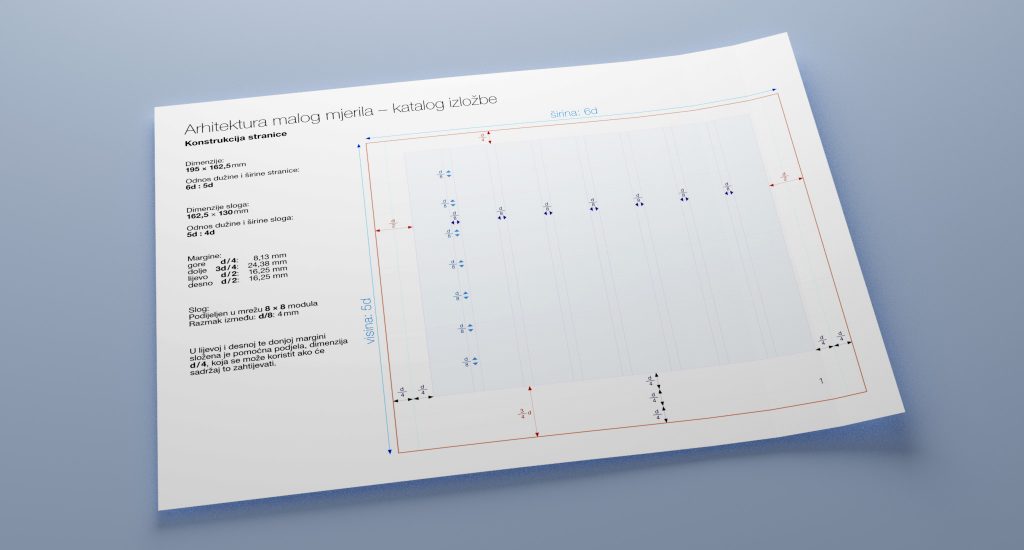 The author’s work stipulated some guidelines and framework for designing the catalog. Heeding exhibition’s title, unusually small (albeit sweet) dimensions of only 19,5 × 16,5 cm were chosen. And of course – Helvetica – as the epitome of the 20th century’s second half.

First was arranged a brief sketch as a starting point of the design. It used light humanistic sanserif type to evoke fresh and elegant contemporary feel.
However it soon became clear that the time in which Vlado Petričević made his most well-known works, resolutely called for Helvetica as a main and only type. At the same time the final layout was constructed using book’s main dimensions as a base for building blocks that made a design grid flexible enough to accommodate wide variety of content.
A contemporary touch was added with newer light cut of Helvetica, used mainly for headlines.

The project lead and art direction was provided by Iva Ceraj, custodian of Croatian Museum of Architecture of the Croatian Academy of Sciences and Arts. Under her competent supervision, emerged the final product as a true hommage to author’s work and the era that formed him and in which he worked.

I have never participated in many “Helvetica wars” that roamed passionately through design scene in past decades. Although my stance on Helvetica was neutral I have never used it in my designs either.
As with almost any project I worked on, this one was insightful too. I learned something about Helvetica’s strengths and weaknesses. (hint – Helvetica preforms superbly at small type sizes) The project proved to be a rich source of new things to learn and new concepts to experiment with.

A few photos from the opening of exhibition can bee seen on my Facebook page.